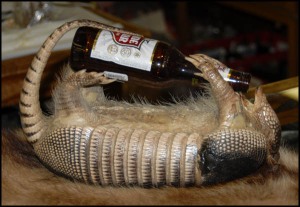 This just says it all, no?

Today is Dillo Day, a Northwestern tradition that dates to 1972. It’s a music festival that happens each year on the Saturday of Memorial Day weekend. We get to see several musicians, including some very well-known ones (B.o.B. this year) for free.

Of course, because Northwestern is a college, it is only natural that Dillo Day is more known for being a drunken shitshow than a music festival. The drinking often starts before noon (or even on Friday night) and continues till everyone is semi-conscious in the wee hours of Sunday morning. Actually enjoying the music is nearly impossible, unless you also happen to enjoy being hit on and groped, pushed and stepped on, and presented with some great views of people making out or having sex in public.

And now I’ll make a confession. I find drunkenness, and drunk people, disgusting. It’s not that I merely find drunk people annoying and inconvenient. I find them, and their lifestyle choices, repulsive. I don’t understand why the hell you would want to end your night getting intimate with a toilet bowl, or why you would want to be too far gone to even remember some of the supposed “best” days of your life.

My issue isn’t so much with the alcohol itself, though my relationship with alcohol has always been sort of hard to explain. My parents are social drinkers; they can hold their alcohol well and rarely get drunk. When they do, they’re louder, more social, quicker to laugh. In other words, they’re more fun. I’ve never actually seen them get very drunk, although one summer my dad went to Israel without us to see his friends and apparently had quite a bit to drink one day. It happened to be the same day that our fridge broke down, and my mom, completely clueless in terms of household appliances, called my dad long-distance and hysterically explained the situation, her fears regarding the baby formula going bad, and so on. My dad’s response was, apparently, a hearty “I don’t give a fuck!” and a dial tone.

And that was the worst of it. I’ve never seen my parents stagger, throw up, or hand their car keys over. I’ve never seen them down multiple shots in a row. (In fact, the only time they drink vodka is at dinner parties with friends, when every shot taken comes with a toast of some sort of emotional significance. Meaningless drinking this is not.)

Consequently, my own experience with drinking has been quite different from that of most people my age. I enjoy wine, mixed drinks, flavored vodka, and champagne. I like to drink wine with my parents over dinner and I can’t imagine New Year’s Eve without champagne. I like to be a bit tipsy, enough to make things a bit cheerier, and myself a bit more bubbly. But I have never been drunk, and I don’t plan on it. (In fact, I was furious a few weeks ago when a friend of mine suggested, laughing, that my friends will “make” me get drunk on my 21st birthday. Excuse me? Nobody can “make” me put anything in my body that I don’t want to put there. Any friend who tries to force anything on my body, be it sex or drugs or alcohol or a piercing or what have you, is no friend of mine after that.)

Last night, thinking about the shitshow that today would inevitably be, I found myself wishing that I were normal, that I could have fun in the way that everyone else can. I wished I wanted to do what they do. But I’ve never been that person. I’ve always been serious and I’ve always preferred to be completely in control of myself at all times. My disdain for drinking to excess is as natural a part of me as my preference for Pepsi over Coke, or the fact that I like to sleep on my stomach and not on my back. How do you change these things?

There are no words to describe such a feeling of isolation, which is one of many reasons I don’t talk about it often. I never fails to shock me how easily I’ve accepted everything else “abnormal” about me–my diagnosis of depression, my bisexuality, my foreignness–but I cannot accept this.

And most of all, I just want to understand. I complain about these things and my friends tell me with a shrug, “That’s just how people are.” But why? Why take an opportunity like an all-day free music festival and turn it into a drunken mess you’ll barely remember afterwards? I even understand drinking and partying when you’re bored, but why on a day like this one? Why is this desire as natural for them as my aversion to it is for me? I want to understand this in a sociological and psychological sense. But I don’t.

I sound like a boring, prissy goody-goody with a stick up my ass. I know I do. But the funny thing is, I’m really not. When I’m in a genuinely good mood, which, thanks in part to my shitty environment, is not often, I’m always laughing and making jokes. I love dancing and trying to sing, exploring Chicago with friends, and frequently acting like an idiot. I’m known to occasionally skip class and go tanning on the beach, and to write my papers the night before they’re due because I was too busy hanging out with friends before. I love fun. But I hate partying. The two aren’t one and the same, you know.

So there you have it. Dillo Day is a disgusting boozefest, and it’s not for me. I guess that makes me an outsider as long as I’m at college (and possibly for quite a while longer). I don’t understand why, as a culture, we are fixated on the idea that people should be moronic and depraved until they turn 30.  I want to know why our society believes that being an idiot in your 20s is some sort of prerequisite to having a happy, successful, and meaningful life–and why everyone thinks I’ll “regret it” if I don’t follow this path. I want to know why college students are required as if by law to drink and party and smoke pot and have a lot of casual sex (another thing I really don’t enjoy), or else they’re boring and “lame.”

I’m fucking tired of being judged. It makes me really angry. Stop.