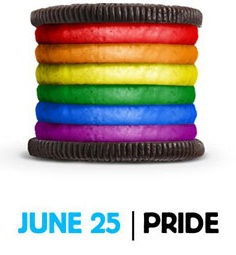 Last Tuesday, Equally Wed magazine held a National Starbucks Appreciation Day and encouraged people to go to Starbucks to show support for their pro-gay rights stance. The event was a response to Chick-Fil-A Appreciation Day, in which droves of people went to Chick-Fil-A to celebrate their right to deny others their rights. The magazine later renamed it “National Marriage Equality Day” and invited other gay-friendly companies to participate.

Starbucks established itself as a company that supports marriage equality earlier this year when its Executive Vice President, Karen Holmes, released a statement on behalf of the company in support of gay rights legislation in Washington state, where it’s headquartered. But it’s far from alone in taking a public stand for gay rights. For example, the Oreo cookie’s official Facebook page made news by posting this photo back in June. American Apparel–hardly a bastion of ethics otherwise–carries a “Legalize Gay” shirt. Companies frequently march in gay pride parades. And so on.

Gay rights are obviously an emotional issue for many people (myself included), and I’ve seen some very different responses to this trend of companies coming out in support of gay rights. Some people get very excited and enthusiastic about supporting these companies in return, and take this to mean that the leadership of these companies is strongly invested in gay rights. Others are extremely cynical and claim that it’s all just a business ploy and means nothing. 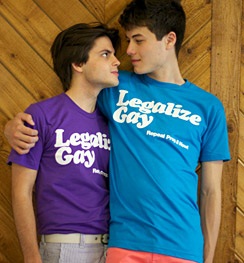 I think that, as it often does, the reality lies somewhere between these two extremes. Businesses never do anything–especially not anything that requires them to spend money–solely out of the goodness of their hearts (hell, businesses aren’t people, so they don’t even have hearts). But that doesn’t mean that businesspeople don’t genuinely care about certain issues and want to use their position as leaders to advance those issues.

First of all, many companies literally put their money where their mouth is when it comes to being pro-gay. They don’t merely post a picture on Facebook or sell a pro-gay t-shirt; they combine their ideological stance with tangible action. Starbucks, for instance, provides same-sex partner benefits to its employees, meaning that an employee’s partner can use their health insurance. (Pretty cool that Starbucks provides insurance even for part-time employees, too.)

Google, meanwhile, not only provides same-sex partner benefits, but even compensates its gay and lesbian employees for a tax on partner benefits that heterosexual couples do not have to pay. It also launched a campaign called “Legalize Love,” which will work to combat workplace discrimination in countries with anti-gay laws on the books.

Aside from partnering with one of the most well-known queer people in the country, JCPenney has recently run ads in its catalogs that feature same-sex parents. What’s more, they did this soon after One Million Moms ran a highly-publicized boycott against them for hiring Ellen Degeneres as a spokeswoman–kind of like an extra fuck-you.

People who know more about marketing than I do seem to agree that being pro-gay is good for business. Furthermore, a study shows that even internal policies–as opposed to public actions like these–helps businesses, at least according to the businesses themselves. 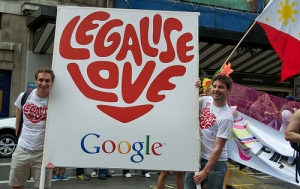 But what’s more important, at least to me, is that these smart business moves are also helpful to LGBT people. Even the symbolic gestures that some companies make–such as Oreo’s Facebook picture–can make a difference. If even one LGBT person comes across them on their newsfeed and feels like the world is a bit less shitty, I would consider that a good deed done.

A lot of the cynical pushback against this comes down to the mistaken assumption that there is such a thing as “true” altruism. Hypothetically, true altruism is when the person doing the altruistic act derives absolutely no benefit from it–no financial gain, no social capital, no personal sense of worth and value. The latter is, of course, an inescapable aspect of doing good things for people–doing good feels good and everyone knows that. And yet you still see people claiming that altruism is ultimately “selfish” because it feels good.

So, either there is no such thing as altruism, or our concept of “selfishness” needs to be redefined. In their support of gay rights, these companies are being “selfish” in the sense that they’re serving a few of their own interests, but they’re also being altruistic in that they’re taking up an issue they don’t have to take up–nobody asked them to do it, and a lot of good may come of it.

Finally, trends in business can be a barometer of public opinion. The reason all these companies are suddenly “jumping on the bandwagon” (as a cynic would say) and openly supporting gay rights is because they can. In prior decades, companies that lobbied for gay marriage rights or published pro-gay opinions would probably have been run out of business–or at least seen their profits severely decrease.

But today, being pro-gay is good for business. I think that’s something to celebrate.