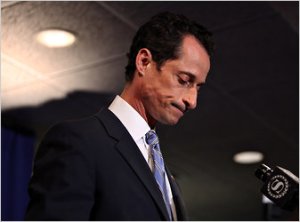 An apology that shouldn't be necessary.

Among the many things that disgust me about American culture, such as the spectacle of parents shoving McNuggets down their kids’ throats and of people desperately trying to get famous by releasing moronic YouTube videos or starring on any one of numerous TV shows meant just for this purpose, one thing that always gets me is the image of a politician or athlete standing in front of a microphone in a room full of reporters and apologizing for his (or her, but it’s almost always a man) personal sexual choices.

I don’t understand this about American culture. I’ve lived here for twelve years now, and I still don’t understand it. Why is it that someone we value for his contributions to politics (or sports or acting or whatever) must also be a pinnacle of human achievement and morality in every possible regard? Why can’t we realize that people are never perfect?

I am completely shocked by the fact that people are now calling for Rep. Weiner’s resignation. Does his sex life affect his ability to make laws? No? Then there’s no reason for him to resign.

Cheating is “bad.” But so is, arguably, driving SUVs, yelling at family members, and being a Buckeyes fan, for instance. Granted, these things are less “bad” then cheating. So how do we decide what’s bad enough to warrant asking someone to resign from their position?

One argument that I hear a lot is that prominent figures are “role models” for our nation’s children and should therefore be held responsible for their personal misdeeds. Well, with Weiner, this may not exactly be relevant, but it certainly applies to other notables whose sex life has become a matter of public record, such as Tiger Woods. As much as I doubt that a little kid who loves sports and strives to imitate Tiger’s dedication to his game would also choose to mimic his dalliances with strippers or whatever they were, I do think this can be a teachable moment. A parent could explain to their kid that sometimes people who are really great at some things make mistakes when it comes to other things, or that sometimes being really talented and famous makes people do bad things. Can we move on now?

Another argument I hear is that the problem isn’t necessarily the sexting thing, but the fact that he lied about it. Well, why shouldn’t he? It’s his business. Saying “no comment” amounts to admitting it’s true, so the only option is to lie. If I did something that I know my friends would disapprove of, and they start asking me if I did that thing or not, I would undoubtedly say no. Because it’s my business.

When it comes to apologies, there is only one person that Weiner should apologize to–his wife. The rest of America should not require an apology from him for something that’s none of their business. I don’t need his apology.

If nothing else, the reaction to the Weiner scandal–actually, the fact that it was even a scandal to begin with–shows that the Puritans who founded this country must be smiling down upon us from heaven, because we’ve proudly continued on their legacy. In this country, if you’re a prominent figure and you do one bad thing, you are a Bad Person, and you must apologize to the entire nation, resign from your position, and live out the rest of your days in quiet solitude, pondering your sins.

If Weiner resigns, I know that I personally will be extremely disappointed. Not only because we’ve lost a member of government who might’ve done some good, but because this sets a precedent–a person who broke no laws and committed no crimes can be forced to lose his job just because we don’t consider him “moral” enough.