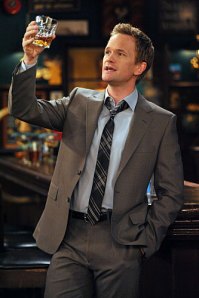 Everybody seems to be obsessed with the CBS show How I Met Your Mother, so I decided to give it a try. I watched a few episodes, which I enjoyed to some extent. However, I soon found myself completely unwilling to keep going.

The reason for my premature abandonment of the show is one of the main characters, Barney Stinson. Widely considered the star of the show and the reason for its popularity, Barney is the consummate womanizer (or douchebag, for those who prefer the vernacular). His entire raison d’être seems to be to sleep with as many attractive women as possible, forgetting their names afterward.

Despite his superficiality, Barney isn’t a flat character, and he does have many other traits–many of which I can appreciate much more than the womanizing. But there’s a huge part of me that simply cannot be amused by a guy who treats women like shit. It’s just not funny to me.

Maybe in another century or two, the idea of a man who tricks women into sleeping with them only to discard them at the earliest opportunity will truly be hilarious, because our cultural scripts for dating and sex will have evolved. People who only want casual sex will be able to openly pursue it without being labeled “sluts” or “players,” and people who want serious relationships will be able to simply avoid getting involved with those who don’t.

In such a society, Barney’s ludicrous schemes to get women into bed with him might seem like a charming relic of another time. But today, I don’t see what’s so funny. People who lie, deceit, or otherwise pressure others for sex are all too common, and my own life has been affected by them, as have the lives of virtually all of my female friends. Barney’s stories might be several orders of magnitude more ridiculous than anything you’d hear in real life (see this for examples), but they’re still based on the idea that lying for sex is okay.

Barney’s character has been so successful that he’s even “authored” two books, The Bro Code and The Playbook, that regurgitate the same type of humor that the show does. Of course, I don’t believe that anybody would actually take these books seriously (although I might be wrong). The problem isn’t that people take this seriously; it’s that they find tired stereotypes about men and women so funny.

Indeed, Barney’s victims/partners are usually portrayed as helpless, dumb girls who are so mesmerized by an attractive, well-off man in a suit that they buy all of his bullshit. But in the real world, of which HIMYM‘s creators are certainly aware, women are rarely so one-dimensional.

Now, I’m sure that there are nevertheless many great things about HIMYM, so I’m not going to condemn the show in general. There’s a reason I titled this post “Why I Don’t Like HIMYM,” and not why you shouldn’t either. But I do think that the question of why we think it’s so fucking hilarious when men manipulate and exploit women* is one that you should ask yourself if you enjoy the show.

I don’t necessarily think that any womanizing male character ruins a television show. For instance, Community‘s Jeff Winger is also known for manipulating women (and people in general). However, Jeff is a much more complex character than Barney is, and he starts to change from the very first few episodes. Barney, on the other hand, seems to remain essentially the same throughout the show’s seven-and-counting seasons, despite a few attempts at actual relationships. Notably, even when he wants something serious with a woman, he still sees no problem with tricking her in order to get it.

No matter how unrealistic and ridiculous these situations are, I just can’t laugh at them. Maybe someday when I’m happily married, I’ll be able to. But not while I’m still surrounded by metaphorical Barneys.

*I am quite aware that women are most certainly capable of and often do exploit men as well. However, since this show is about a (male) womanizer, I’m confining this discussion to that.