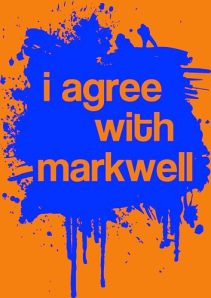 Northwestern’s chapter of Campus Crusade for Christ, an evangelical Christian organization otherwise known as Cru, has an edgy new campaign.

Who’s Markwell? He’s a senior here at Northwestern who was asked by Cru to be the face, so to speak, of this campaign. His first name is Matthew.

The purpose of the campaign is ostensibly to convince people that, like Markwell, they too can have a personal relationship with Jesus Christ. And the way to do this is by placing this quizzical phrase all over campus so that people will be compelled to look it up and find out what it’s all about.

Once they find themselves on the campaign’s website, they’ll learn a bit more about Markwell’s beliefs:

I believe in God. Not just any god, but the God who loves us more than we can imagine. I believe all people are sinful, messed up, jacked up, broken, whatever you want to call it. We intentionally rebel against God and choose to do our own thing, separating us from God and leading us toward death.

As someone who vacillates between Judaism and agnosticism, I can say that this is definitively against my beliefs and I find it disempowering, depressing, and completely contrary to what I believe human nature to be.

However, that’s just my belief, and both Markwell and I are entitled to our own beliefs. And if that were all there was to it, I wouldn’t be writing this blog post right now.

The reason I am writing this blog post is because our campus magazine interviewed Markwell about this campaign. Here’s what he had to say:

When I see people here at Northwestern who don’t believe in God, I see them as lost, and that’s not probably how they would identify themselves. But from this side looking out, the best thing I can do to care for people is to show them why I believe what I believe. If anybody were to step into our shoes — step into my shoes — and see the people at Northwestern the way that I see them, then I think that the most loving thing you could do in that scenario is tell them about this opportunity to know the God of the Universe.

So, to rephrase: Markwell sees it as his loving duty to help us all find our way to Christ, because otherwise we’re “lost.”

Now, nothing I’m saying here is meant to apply to most Christians, because I’m hoping that most of them don’t see us non-Christians this way. But those Christians who do insist on proselytizing in such intrusive and condescending ways need to realize that, not only are they completely failing at being decent human beings, but they’re also pushing away the very people they’re trying to reach out to.

Cru is pretty well-known for their invasive tactics. As soon as I posted about this on Facebook, several Christian friends pointed out that they disagree with Cru. One said:

I remember last year they were handing out surveys and if you filled it out they gave you Play-Doh. And being a naive freshman, I was like “Yay! Play-Doh!” Little did I know they would use the information I gave them to show up at my door unannounced and harass me. While I was slightly creeped out, I actually kind of liked what they had to say and I was exploring my religious beliefs so I agreed to go out to coffee with this girl and talk some more. But after I did that she just kept calling me and texting me and emailing me and I tried to be polite by just telling her I was busy but she wouldn’t take the hint. If they really want to spread their message, this is not the way to do it. And they need to accept that not everyone is going to share their beliefs and that that’s okay.

Cru also realizes that people wouldn’t actually check out this campaign if they knew off the bat that it was about Christianity. From the NBN article:

The Christian faith is pretty well-known…[s]o if people just see a bunch of people wearing shirts that say ‘I Agree with Jesus’ then we probably won’t get as many conversations as ‘I Agree with Markwell’ and ‘Who is Markwell and why do you agree with him?’

Does anyone know why that is? It’s because people tend to already know whether they’re interested in Christianity or not. So tricking them into going to this website to learn more about it seems a bit disingenuous to me.

It’s telling that the organization sponsoring this campaign has the word “crusade” in its name. (Granted, it’s tried to rebrand itself as “Cru” to escape that.) I’m not suggesting that Cru is in any way equivalent to the actual Crusades, but I don’t think the use of that word was arbitrary. I think it says something about how much–or rather, how little–the members of this organization understand the fact different people choose different beliefs for a reason.

And no, that reason is not because we’re “rebelling against God.”

I don’t agree with Markwell. We’re not lost. We’re not “sinful, messed up, jacked up, broken” either. We just don’t believe in Jesus Christ. Can Markwell please get over that?

Edit 4/18: Here is a response to this post from a Cru member, and here is a post from an awesome friend of mine.

70 thoughts on “We’re Not Lost: An Open Letter to Campus Crusade for Christ”