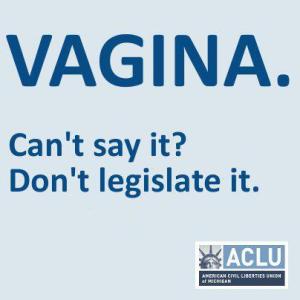 However, you’d be wrong.

This is old news now for anyone who follows these things, but in case you don’t, here’s a recap. On June 14, the Michigan House of Representatives was debating a new bill that would severely limit a woman’s ability to get an abortion by placing new restrictions on abortion providers. The bill passed the House and will go to the Senate most likely in September. (They were also debating a separate bill, which did not pass, that would’ve restricted all abortions after 20 weeks, with no exception for rape or incest).

In response to this, Representative Lisa Brown (three guesses which party) gave a speech in opposition and said, “I’m flattered that you’re all so interested in my vagina, but ‘no’ means ‘no.'” You can see her speech in its entirety here.

The shock! The horror! Brown was quickly forbidden from speaking on the House floor by Republican leadership of the House. A spokesman for Republican Speaker of the House Jase Bolger said, “House Republicans often go beyond simply allowing debate by welcoming open and passionate discussion of the issues before this chamber…The only way we can continue doing so, however, is to ensure that the proper level of maturity and civility are maintained on the House floor.”

To that end, Republican Representative Mike Callton said that Brown’s remark “was so offensive, I don’t even want to say it in front of women. I would not say that in mixed company.”

What Bolger, Callton, and the rest of these concern trolls apparently do not realize is that language is malleable and entirely based on context. In general, words might be inappropriate to say for three different reasons:

These three categories of Bad Words operate in different ways. The first category is inappropriate to say basically always, unless, in some cases, you belong to the group targeted by the slur, or you are using the word in a conversation about the word (but even that is controversial).

The second category are words that are usually used to make a statement. They are much more frequently okay to use than the words in the first category. That’s why when people curse, they use these words. That’s why many writers, such as myself, use them for effect. They’re generally okay to say around your friends, but many people avoid using them in front of people they don’t know well.

The third category comprises words for things that we usually avoid discussing in polite company without a good reason. You wouldn’t exclaim, “That looks like a penis!” in front of your grandma, and you wouldn’t say, “My vagina feels funny” in front of your boss (I mean…unless you have a very open-minded boss/grandma). It’s not the words themselves that are “bad,” it’s the fact that you usually shouldn’t talk about the things those words refer to if you want to be polite.

But all of this falls apart when the context demands discussion of such topics. If you’re at a doctor’s appointment and the doctor needs to tell you something about your penis or vagina, it would be laughable for him or her to avoid using those words. If you’re negotiating sex with a partner, you shouldn’t have to worry that he or she will be offended if you use those words. And if you’re attempting to legislate what women can and cannot do with their private parts, you’re going to have to face the fact that those parts have names.

The most ironic thing here, though, is Callton’s remark about the word “vagina”: “I don’t even want to say it in front of women.” First of all, that’s patriarchal as hell; women can handle naughty words just as well as men can. Second, it’s not just a naughty word; it’s a word for a thing that (most) women experience on a constant basis.

After all, pro-life politicians do not wake up in the morning thinking, “Yo, I’m gonna take away some rights from women and tell them what to do with their own vaginas today.” They think, “Abortion is murder and I have a duty to stop it just like I would stop the murder of a child or adult.” To them, drawing any parallels whatsoever between restricting abortion and committing sexual assault would naturally seem preposterous. It is only those of us who couch the debate in the language of personal liberty who see the similarities.

That’s why this whole incident really highlighted for me the divisions between liberals and conservatives on the matter of reproductive rights. It’s not even just that they can’t agree on whether or not abortion should be legal; it’s that they can’t agree on what abortion is, and on the terms with which the debate should be framed. Liberals say abortion is a woman’s right over her own body; conservatives say it’s the murder of an unborn human being. How can we ever reach a consensus if we define our terms differently?

I don’t know how to solve this problem–and if I did I would probably be the savior of American politics–but at least this story has a partially-happy ending. Brown and several of her colleagues performed the play The Vagina Monologues with its playwright Eve Ensler on the steps of the statehouse last Monday night as a tribute to our right to speak the names of our own body parts. About 2,500 spectators came to watch.

But as for the bill that the House passed, that’ll go on to marinade in the state Senate, which currently has 26 Republicans and 12 Democrats. I’m not getting my hopes up.

1 thought on ““Vagina” is Not a Four-letter Word”