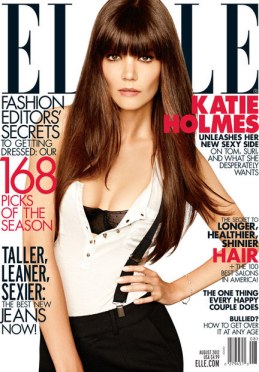 Nope, no Photoshopping. Nothing to see here, move along now.

This time, though, I didn’t even get past the magazine’s front matter before finding something objectionable. In her opening letter for Elle magazine’s August issue, Editor-in-Chief Roberta Myers discusses the recent legislation in the U.K. that would require digitally altered photographs of models to be labeled as such. You can practically feel the derision and dismissal dripping off the page:

So now the National Academy of Sciences is getting into the act, trying to define what ‘impossibly beautiful’ means. In response to legislation pending in the UK to require digitally altered photos to be labeled out of concern for public health, as well as the American Medical Association’s campaign against changing pictures ‘in a manner that could promote unrealistic expectations of appropriate body image,’ two Dartmouth computer scientists proposed a ‘metric’ at a recent NAS meeting designed to rate how much retouched photos have ‘strayed from reality.’ The authors noted that ‘highly idealized’ images have been associated with eating disorders, such as anorexia.

Scare quotes aside, I have the feeling that Myers knows exactly what “impossibly beautiful” means, even if the idea of defining it operationally seems a bit silly. I do think that regulatory measures like these should be approached with a certain degree of healthy skepticism, because government regulation should not be undertaken lightly and without good evidence. But Myers isn’t critiquing it skeptically. She’s sticking her head in the sand and denying that a problem exists.

Furthermore, the regulations don’t even propose to ban severely Photoshopped images, but merely to place labels on them. Is putting an extra little bit of text on the bottom of an image really such a burden for Myers? I think not. Note that some countries are going even further–Israel, for instance, banned the use of underweight models in advertising entirely.

Yet according to David Scott Rosen, MD…eating disorders are as old as the Bible. They cropped up in popular literature 200 years ago–long before Photoshop but right around the time when John Singer Sargent painted his famous Madame X (Madame Pierre Gautreau), a most flattering oil-on-canvas portrait that left out many a “flaw.”

I couldn’t find a citation for this, but it’s probably true. However, nobody’s claiming that eating disorders exist solely because of unrealistic beauty standards in the media. It’s not like a perfectly healthy young woman (or man, but that’s a slightly different conversation) opens up Elle magazine, sees a picture of a thin model, and immediately starts starving herself. Eating disorders arise from a complicated interaction of genetics, family life, and the surrounding culture. They involve complex cognitive processes, such as the ones described in this study. As another example, research shows that people determine attractiveness based on what they have seen the most. So if you’ve been looking at images of impossibly thin women for your entire life, that may be what you’re going to find attractive–and that’s what you may aspire to be.

We can’t prevent genes that predispose one to eating disorders from being passed down, and we can’t make it illegal for parents to teach their daughters that their appearance is the most important thing and that one should use unhealthy means to maintain it (though, with more education, we might be able to prevent that). We can, however, place restrictions on the images that permeate our media.

Furthermore, Myers conveniently ignores the fact that eating disorders have been growing more and more prevalent over the past century, especially among young women. Studies have also shown possible links between media that promotes thinness and eating disorders. It is impossible to establish a causative link with certainty, but that’s because 1) nothing is ever certain in science, and 2) we live within a culture that promotes and glorifies thinness. You can’t really evaluate phenomena like this accurately when you exist within the system that you’re trying to evaluate.

But luckily, studies done with non-Western cultures are very revealing. One extremely compelling study showed that girls in Fiji, who previously had little exposure to Western media, became much more likely to show signs of disordered eating after watching Western television shows for the first time.

Several Google searches brought up countless studies like these. Myers seems to consider them irrelevant here. She continues:

My point is that trying to define “impossible beauty,” and then regulate its dissemination by putting warning labels on retouched images, seems rather preposterous. You know, my chocolate bar never looks quite as creamy as it does in the ads; cars are never quite that sexy and sleek; and the milk in my cereal bowl never looks quite that white. Oh, wait! It’s not milk at all! It’s some gelatinous concoction meant to look like milk while it stays sturdy under hours of hot lights. Shall we label those photos, too?

This passage is as laughable as it is offensive. First of all, cool slippery slope fallacy, bro. Second, while one may argue over the sleekness of a car or the whiteness of a bowl of milk, it is completely unmistakable when magazines alter photos of models such that they appear to thin to actually be alive.

As I mentioned, the link between digitally altered images and eating disorders probably isn’t simple. But research is increasingly showing that it is there. It is worth noting that Myers never makes any comments about her own magazine’s use of Photoshop, which tells me that she’s fully aware of what she’s doing and is just willfully playing dumb. She knows. And she’s threatened by it, because things are starting to change.

But she’s not done. She goes on to cite an article in this month’s issue:

I wonder what the National Academy would have to say about the photograph we ran in this issue of novelist and essayist Ann Bauer, who writes so eloquently about growing up “ugly”–bearing a steady stream of abuse about her looks from classmates, strangers, and even lovers.

This bit confirms for me what I already suspected–that magazines like Elle print articles like this solely from the purpose of distracting people from the role they play in upholding our society’s beauty standards. These magazines can trot these articles out as examples of their commitment to portraying “women of all shapes and sizes,” when, in fact, they use these women as tokens.

The article in question is indeed a beautiful article. But what’s ironic is that Myers doesn’t even realize how magazines like her own have contributed to the bullying and abuse that women like Bauer face. Of course, people have always valued beauty and mistreated those who are deemed “ugly.” But lately, the box into which women must fit in order to be considered beautiful has been shrinking, whereas the “ugly” box has been growing. Magazines like Elle may not be the only (or even the main) causes of this trend, but it would be naive not to implicate them in it.

Furthermore, that photo of Bauer that Myers is so proud to have featured? It takes up one corner of a page and measures about two by three inches. Compare this to the dozens of full-page Photoshopped models in the magazine.

The most telling (and touching) part of Bauer’s piece, to me, is the end, in which she describes visiting Hungary with her husband and going to the opera in Budapest:

I turned and found myself looking into a full-length mirror. And I saw something I’d never seen before: myself, in a sea of women who looked just like me.

[…]Everywhere I looked in that lighted glass, there were women with large features, deep-set eyes, rounded cheeks, riotous hair, and delicate-yet-meaty little bodies. We were, in other words, an army of ugly people.

Only, for the first time in my memory, we weren’t. I wasn’t. I was normal, even conventionally attractive. Stylish. Interesting. Sexy. Simply that.

I stood in front of that mirror in the Hungarian State Opera House, watching couples mill. Men holding the arms and hands of dozens of women who could’ve been my sisters, mother, and daughters, tipping their heads back, kissing them lightly, gazing with naked admiration at faces like mine.

Bauer shows, ultimately, that she is not ugly. It is American culture that makes her out to be so. In Hungary, women who look like her are not bullied. They are not sent anonymous emails about how ugly they are. They are not denied jobs or pressured to lose weight and get plastic surgery.

This makes Myers’ stubborn refusal to examine the potential effects of her magazine even more ironic (and upsetting). Magazine editors seem to feel that they are being solely blamed for the devastating experiences of many women (and, increasingly, men), but no informed researcher or critic would say that magazines directly cause eating disorders. We have to examine this phenomenon as a system of interacting elements–the mass media, politics, families, and individual brains and bodies–in order to begin to understand how to prevent unhealthy beauty standards, poor body image, and eating disorders.

We can’t start without making sure that everyone knows that the images they see around them every day of their lives are not realistic. They’re not something to aspire to, because they cannot be obtained–except perhaps at a very high cost. 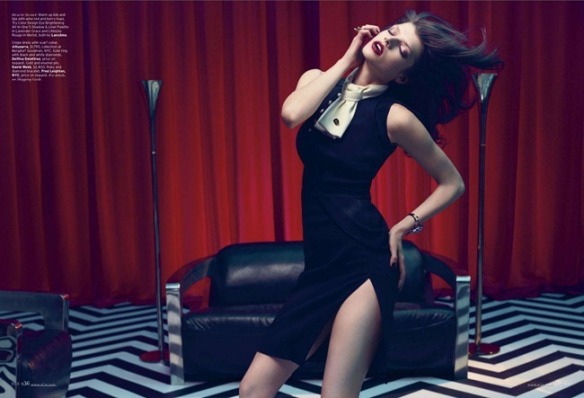