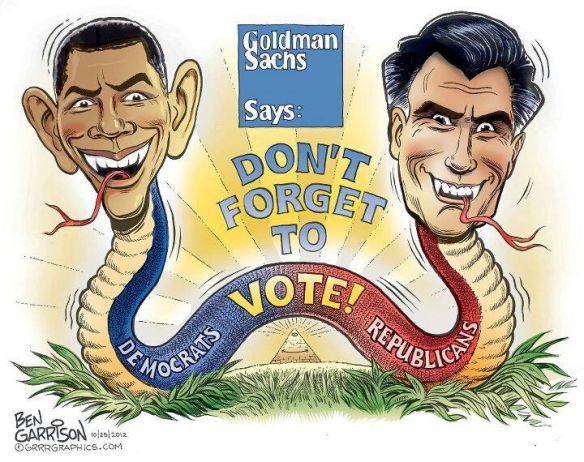 I disagree with this, by the way.

Some people seem to think that Republicans and Democrats are basically identical policy-wise, that Obama and Romney they’re both evil, and that it doesn’t matter which one of them becomes our next president because they’re basically “the same.”

On some issues, of course, they are. Neither is willing to substantially decrease the United States’ meddling in other countries’ affairs and/or killing innocent civilians in those countries. Neither seems interested in removing corporate interests from our political system, or reforming it to allow third parties to have more influence. Both have remained infuriatingly silent on the subject of climate change. Both support violating civil liberties as part of the war on terrorism.

There’s a reason I only ever see straight white dudes making this argument, and that reason is this: it’s easy not to see the difference between Obama and Romney when it’s not your rights that one of them is trying to take away, and the other is trying to protect.

You can argue that Obama has actually done little to advance the rights of women, LGBT people, and racial minorities (though I would still disagree). But you cannot argue that this makes him equivalent to Romney, who fights to take those rights away. These things are just not the same. And I would still take a president who says pretty words but does little over one who actively does things that harm already-marginalized people. In a heartbeat.

I frankly have little respect for people who refuse to vote out of protest. Don’t vote for Obama if you hate him so much. Vote for a third party candidate. Write in Jon Stewart on the ballot. Do something. You might claim that not voting is an act of protest, but guess what–protests only work when they’re noticed. Nobody’s going to notice you smugly sitting on your sofa, just as nobody can hear you being silent.

Besides, you might be surprised to know that the rest of us aren’t willing to give up our rights for the sake of your act of protest.

Ideally, of course, we would have a vibrant multi-party democracy, and people who are mostly concerned with individual freedoms could vote for Libertarian candidates, whereas people who are mostly concerned with equality and progress could vote for Green Party or Socialist candidates. But right now, we don’t have that. We have two choices right now: Obama and Romney.

I say we should elect the lesser of two evils.

Many people don’t like that. They protest that the lesser of two evils is still evil and that we shouldn’t have to compromise–but it’s politics. Of course we do.

Besides, when you refuse to choose the lesser of two evils, you stand aside for the greater evil.

If you’re still unsure, go hang out on Romney’s website for a while. And consider this:

9 thoughts on “No, Obama and Romney Are Not “The Same””