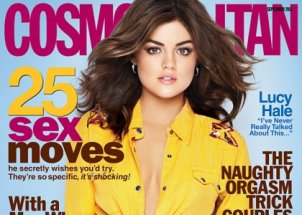 Remember that post about celebrity gossip I just wrote? Well, here’s an example of how reading that stuff can be useful and enlightening.

I’m reading an interview in the September issue of Cosmo with Lucy Hale, a 23-year-old actress most known for her role on Pretty Little Liars, a guilty pleasure of mine. In the interview, Hale opens up (apparently for the first time) about the eating disorder she struggled with as a teenager:

But behind the scenes, Lucy developed a dangerous habit all too common among young starlets. ‘I’ve never really talked about this, but I would go days without eating. Or maybe I’d have some fruit and then go to the gym for three hours. I knew I had a problem,’ Lucy says of the issue that plagued her for two years. Luckily, unlike some actresses who have been unable to escape the downward slide, Lucy had the strength to turn herself around. ‘It was a gradual process, but I changed myself,’ she says.

Except for the following paragraph, in which Hale talks about cutting damaging friendships out of her life, no other details are given about how she recovered from her eating disorder, and I won’t assume. However she did it, it’s awesome and she deserves to feel great about having accomplished that.

However, the Cosmo writer takes it a bit further with this sentence: “Luckily, unlike some actresses who have been unable to escape the downward slide, Lucy had the strength to turn herself around.”

Wait…what? So people who succumb to the “downward slide” of eating disorders, or who need professional help to recover, just lack the “strength” that Hale has?

If Hale really did recover without any professional help–which, again, she does not make that clear–there are many potential reasons for that. Perhaps she had a great support system of friends and family. Maybe she’s not genetically predisposed to eating disorders. Maybe her parents have healthy eating habits that they were able to model for her. She might’ve not had as serious a case as others do. Or perhaps she just got lucky.

None of this means that actresses who are “unable to escape the downward slide” have any less “strength” than Hale did. It means, probably, that they had different circumstances. Different lives.

So, how does one talk about people who have recovered from mental illness on their own without putting down those who cannot? My answer would be, by not comparing them to each other. Hale recovered? That’s awesome. Another actress didn’t? That’s a tragedy, and she deserves help and support. Their illnesses are not comparable, even if they happen to share the same name.

As Leo Tolstoy said, unhappy families are all unhappy in their own way. Similarly, people who suffer from mental illness all do so in their own way. Just because one recovers and another does not doesn’t mean that one has more “strength” than the other.

P.S. Before anybody goes all “but it’s just Cosmo, who cares!”, Cosmo has a circulation of over 3 million in the United States and is also distributed in over 100 other countries in 32 languages. Readers of this blog probably think Cosmo is silly and not something to be taken seriously (which it’s not), but the truth is that many people around the world probably get most of their information about things like mental illness from media like this. So it’s definitely worth examining and critiquing.

The stigma of mental illness has many negative consequences, such as decreased access to employment and housing, barriers to seeking treatment, and many broken friendships and relationships.

What it also does, unfortunately, is make it much harder for people who’ve suffered from mental illness to speak about it publicly, using their real names.

I’ve been thinking about this because North by Northwestern, our campus magazine, ran a feature in its spring issue about mental illness at Northwestern. Overall, the piece was great and discussed how our academic system may be contributing to unhealthy levels of stress. The author of the piece interviewed two students who spoke about their experiences with depression and anxiety.

But both of the students’ names were changed for the article, and it bothered me.

For the record, I would never begrudge an individual for choosing to speak about his or her mental illness under a pseudonym. We all have different priorities, and not everyone has decided to spend their life advocating for those with mental illnesses (as, for instance, I have). Even those who do may decide that using a pseudonym is in their best interest–for instance, this blogger whom I greatly respect.

The magazine, however, could have chosen to find sources who would be willing to let their real names be printed. I know it could’ve, because those people exist on our campus. I’m one of them. Many of my friends are, too.

This is important for several reasons, some short-term and some long-term.

The short-term reason is that seeing fellow students speak publicly about their experiences with mental illness can make a huge difference in the life of someone who’s just starting to acknowledge and deal with their own illness. It lets them know they’re not alone and gives them hope for the future.

It can also give them a specific person to reach out to. After I started writing about depression, friends, acquaintances, and even strangers started writing to me, sharing their stories, and asking for advice. I heard from friends that I knew were struggling and friends who seemed to have everything together. I heard from a guy who’d told me once that he’d had depression briefly but pulled himself out of it on his own. I felt humbled to know the truth.

A friend of mine who spoke in a panel about her eating disorder once told me that she had the same experience. She was quoted in an article about the panel, and afterwards people reached out to her about it.

There’s a bigger picture, though, as well. Every time someone “goes public” about a mental illness, they chip away at the culture of secrecy that surrounds it. And the more of us do it, the harder it’ll be to deny us jobs, cut off friendships with us, continue believing that we’re weak and lazy, and be ashamed of us.

I’m glad those two students spoke to NBN, and I know it was hard for them to do even knowing that their names would not be in print. But NBN had a chance to do something really important, and they missed that chance.

As I was writing this post, I found out that there’s someone pretty powerful who recently took that chance. During his speech for people who have lost family members in the military, Vice President Biden talked about the deaths of his wife and daughter in 1972. Then, he said, “I probably shouldn’t say this with the press here, but it’s more important–you’re more important.” Then he went on:

Biden’s not the only one, of course. Plenty of well-known people have spoken about mental illness, such as Rachel Maddow, William Styron, and Demi Lovato.

In his seminal book on depression, The Noonday Demon (which I have coincidentally just finished reading), Andrew Solomon intentionally avoids using pseudonyms whenever possible. On the first page of the book, he writes,

I asked my subjects to allow me to use their actual names, because real names lend authority to real stories. In a book one of the aims of which is to remove the burden of stigma from mental illness, it is important not to play to that stigma by hiding the identities of depressed people.

Accepting the use of pseudonyms in one’s work just because that’s what’s always been done, or because finding interview subjects who are willing to use their real names might be difficult, does an injustice to everyone who suffers from the continuing presence of stigma. 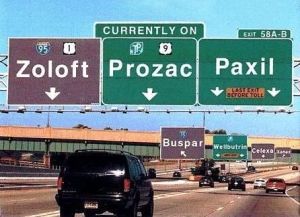 You're not a bad person if you take any of these roads. I promise.

Spoiler alert: They have nothing whatsoever to do with each other.

People love to hate psychopharmacology, especially antidepressants, the efficacy of which is constantly being questioned (often for good reason). However, I’ve noticed that drugs like antidepressants receive a special type of scorn, one that cannot be based solely on the efficacy mystery.

I’ve found that where mental treatment is concerned, therapy holds some sort of moral superiority over drugs in many people’s eyes. I think many people still feel that mental disorders are spiritual illnesses, not medical ones, and that treating them with a pill is some sort of cop-out. (Imagine the public furor if researchers came up with a pill to, say, erase the feeling of guilt.)

This would explain why, though therapy is still stigmatized–after all, the Ideal Person works out these issues on his or her own–it is considerably less looked down upon than psychotropic medication. Our culture values struggle and hard work so much that even recovering from an illness should be mentally effortful.

What people don’t realize is that there are plenty of perfectly legitimate reasons why someone might choose medication over therapy, at least in the short term. Consider, for instance, the situation I found myself in a month before I began my sophomore year of college. Having spent my entire freshman year growing progressively more depressed, I’d thought that coming home for the summer would magically fix everything. It didn’t. With a month to go, I realized that I felt like I’d rather die than go back to school.

That was when I was first diagnosed with depression, and I think my psychiatrist realized, as did I, that I just didn’t have time to muck around with my feelings–I had to get better quickly, or else going back to school would be more upsetting and stressful than I could handle. So I started taking antidepressants and quickly improved enough to feel like I could deal with being in school. The mucking around with my feelings came later.

Aside from that, I can think of many other reasons medication can at times make more sense than therapy. For example:

Of course, I do believe that therapy is really important and generally awesome, which is why one of my upcoming posts will be about why I think that everyone (or almost everyone) should see a therapist. Stay tuned. 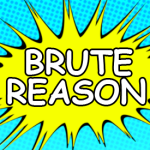 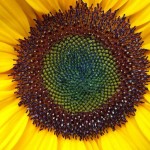 Eve's personal blog. I am the co-author of More Than Two and Black Iron and the founder and publisher of Thorntree Press.