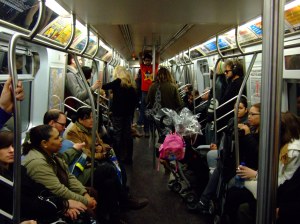 I spent this past week in New York City with my mom and little siblings, who are six and nine years old, respectively. Aside from a few times that they were too young to remember, this was their first time in the city and they had a great time.

On our last day in New York, however, they were confronted with a situation that they would never have encountered back home in Ohio.

We had just gotten on the subway in Queens to go to Manhattan. The train was full, but my  brother and sister found seats next to an older lady. My mom and I, meanwhile, stood facing them.

As my siblings sat down, the older lady mumbled something in their general direction. “I’m watching you,” she growled at them.

None of us paid much attention to this at first. I took out my phone and started reading on it, just as many other commuters on the train were doing.

And then the older lady started saying something that made me consciously notice her race–African American–for the first time.

I calmly ignored the diatribe, as is the unspoken code of conduct on the New York City subway. It’s impossible to spend even a day in the city without encountering at least one person who is drunk, high, schizophrenic, or otherwise in a state that makes them spew nonsense. The thing to do is to just let it go.

My mom and my siblings took note as the lady kept going.

“You bunch of white trash. I’m watchin’ all of you. You and you and you.” She gestured at my brother and sister.

She kept going in this vein right up until the train reached her station. She stood up and picked up her purse. “Finally I never have to see your ugly white faces again,” she said, and left the train.

I sat down in her seat next to my siblings, glanced out the window, and saw the lady walk off. I turned back around and relaxed. As the train was about to pull out of the station, I heard a thud on the window behind me. My siblings and I, startled, turned around and saw that the lady had come back and hit the window where we were sitting.

This experience made quite an impression on my brother and sister. They talked about it to all the friends and family we saw that day, and they were still talking about it on the plane home the next day. I tried to tell them that some people are strange or disturbed and say weird things, but that these people are not the majority. I’m not sure what they thought about it, but I’m afraid that they’re too young to consciously, coherently think about it at all.

But my siblings have not. In the leafy Ohio suburb where my family lives, diversity is almost nonexistent. We’re one of very few Jewish families here, for instance, and when I Iived here I knew only a handful of black people and no Latino/a people. (Asians are probably the only minority that’s well-represented here.)

This trip to New York was probably my siblings’ first experience with seeing such a tremendous diversity of races and ethnicities (not to mention orientations and gender identifications). The fact that one of their only verbal interactions with a stranger in New York happened this way can’t be a good thing.

Furthermore, unlike my little siblings, I’ve read enough about race relations to understand the circumstances that cause people to develop the views that the lady on the subway had. Perhaps she’s watched friends and family members being unjustly stopped and searched by the police. Perhaps she’s been denied housing or other needs because of her skin color. Perhaps she’s witnessed white people refusing to sit down next to her on the subway at all. Perhaps her calling us “ugly” is a response to a mass media that depicts whiteness as the only variety in which beauty can come.

I know all of this and more, but my siblings don’t, and they’re way too young for me to try to explain it to them. With all the difficulties they face because of learning English as a second language, having a culturally nonconforming family, and, sometimes, even simply being Jewish, the idea that someone might view them the way they view kids who taunt them for their accent or curly hair, is probably a confusing one. They don’t know what it means to be “white” in America. I don’t think they’ll know for a long time.

And that’s the real tragedy. If these two kids develop the unjustified fear of black people that many white people have (even if it’s only subconscious), it won’t be from the surrounding culture, as many would assume. It’ll be from a concrete experience that happened when they visited New York City for the first time and encountered people who don’t look like them. They’ll remember feeling trapped on the subway as a woman they don’t know threatened to “blow their brains out.” They’ll remember being told that their skin color makes them ugly. They’ll remember that the woman was black, because she pointed out that they were not.

And so, racism is perpetuated. Even if my siblings end up forgetting this particular experience, there may be others, and there will be many other kids who encounter a situation like this one. My brother and sister weren’t to blame for this woman’s distress, but to expect her to “rise above” it would be presumptuous. Whatever happened that made her say those things is real.

For once, I have no solution to propose. My purpose in sharing this story was only to illuminate the importance of teaching children how to empathize and how to keep themselves from forming stereotypes–much easier said than done.

They should also be taught more than just that slavery “happened” and is now over (if only race relations were really that simple). The woman on the subway was a racist and she was wrong, but people don’t become racists in a vacuum.

I can only hope that when my siblings are old enough to understand all of this, they will still be open-minded enough to learn it.

Eve's personal blog. I am the co-author of More Than Two and Black Iron and the founder and publisher of Thorntree Press.